A Fan Error in this case is not when your Facebook fan page is down. I received this message after my Lenovo X61s notebook decided to quit and I restarted it. The screen said "Fan Error", and the notebook refused to continue to the boot process.

Of course this is the last thing you want on a Sunday evening, but in true GTD fashion, I wanted to fix it right away. Here's how.

In order to not electrocute myself, I removed the battery and unplugged the notebook.

I basically unscrewed every screw there is at the bottom of the notebook, until it would let me remove the upper part of the casing and keyboard. 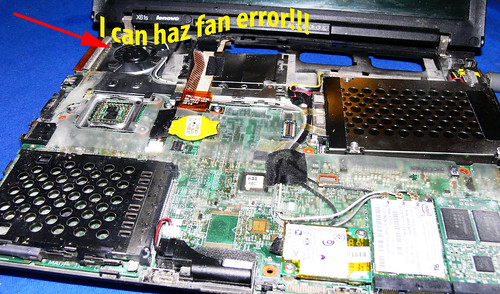 Then I tried to carefully clean the inner of my notebook from dust and dirt that accumulated over the past 14 months since I purchased it. I think had dust (and what not) from North America, Europe and South America in there. It was kinda gross. It really didn't look pretty. And that is despite all efforts to not eat and drink near it.

When I got to the fan, it wouldn't really move. Hence the fan error!

I forced it a little and white dust came out of it. So I decided to take more drastic measures and sucked it clean using my Dyson. In the beginning it wouldn't really move, but it took only a minute to resolve that. (Word of advice: If you are not super careful, the Dyson will try to suck in whatever it gets. So make sure to not vacuum the insides of your notebook. ;-))

Reassembly is pretty simple. The case clicks, and then you fill in the screws. IBM/Lenovo were smart enough to only use screws of the same type. There was a total of ten (or maybe nine), and they are all gone. So that must have worked.

Don't try this, unless you have to. And know what you are doing. This blog entry comes with no guarantees or extended warranty. Being able to fix little things yourself, feels good though.

The author does not allow comments to this entry